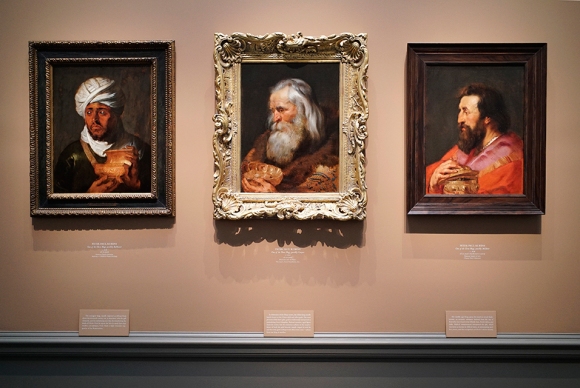 Three paintings, separated for almost one hundred thirty years, have finally been brought together again thanks to the National Gallery of Art in Washington DC. Melichor, Gaspar and Balthazar are three of the most recognizable characters in Christian art, known to people all throughout the world as the Magi, the Three Kings, and the Three Wise Men. The three men can be scene in countless works, from your neighbor’s animatronic nativity scene, to The Adoration of the Magi, a work recreated by masters such as Leonardo Da Vinci, El Greco, Diego Velásquez, Rembrandt, and Albrecht Dürer. The three magi are meant to represent a number of things, like the three continents of Africa, Asia and Europe, as well as the three stages of age.

Peter Paul Rubens was commissioned to create the three portraits in 1618 by the head of Officina Plantiniana, a printing and bookmaking company from Antwerp. The head of the company, Balthasar Moretus, was a friend of Rubens. It is actually appropriate that Moretus’s two brothers were named Melichor and Gaspar. The paintings have been marveled for nearly four hundred years for their unique take on the magi. Rubens created several paintings entitled The Adoration of the Magi during his life, but to create three separate, bust-length portraits was altogether a new idea.

The three paintings were separated in 1881 at an auction in Paris. Currently, the portrait of the Old King (center in the photo above), is owned by the Museo de Arte in the city of Ponce, Puerto Rico. The old man, thought to be Gaspar, represents Europe with his white hair and fair complexion, and is shown with the gift of gold. The portrait of the Young King, known to be Balthasar, is owned by the Plantin-Moretus Museum in Antwerp, the museum of the printing company whose owner had commissioned the portraits. Balthasar (left in photo above) is shown as the African king bearing the gift of myrrh. The portrait of the middle-aged king, Melichor (below), represents Asia, and is shown with a chalice filled with frankincense, made from the sap of trees found in the Middle East and India. The Melichor portrait is currently owned by the National Gallery of Art in Washington. The portraits of the old and young kings were previously on display at the Ponce museum in an exhibit Wise Men From East: The Magi Portraits of Rubens before being shipped to Washington to be reunited with the third, middle-aged king. 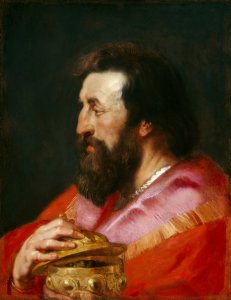 The portraits will be on display at the National Gallery of Art in Washington until July 5th in an exhibit called Peter Paul Rubens: The Three Magi Reunited. The exhibit will also examine the lives and relationship between Peter Paul Rubens and Balthasar Moretus.

Nathan Scheer is contributor to The Artoholic and a webmaster for TheArtExperts.org, who is currently studying History and International Studies at Elon University in North Carolina. He has also worked for Rehs Galleries, Inc. and Rehs Contemporary Galleries, Inc., which specialize in 19th and 20th Century European paintings and contemporary academic paintings, respectively, as well as Christie's Rockefeller Center.
View all posts by Nathan Scheer »
« All’s Well That Ends Well
The Buildings Are Alive »