How Would You Like To Pay? Cash, Credit, or Bitcoin?

The Internet and the virtual world is evolving so rapidly that even I, an eighteen-year-old, can’t keep up with it sometimes. One of the more perplexing things that has come into light in the past year is the prominence of the Bitcoin. For those who don’t know what that is, Bitcoin was originally a payment system on the Internet used to bypass middlemen like banks, making the exchange of money easier and more efficient. This payment system has its own virtual currency, called Bitcoins. The Bitcoin started out cheap, but the current exchange rate as of August 30, 2015 is nearly $230 for one Bitcoin (BTC). Ever since the creation of the Bitcoin in 2008, there have already been Bitcoin heists, Bitcoin charities, and criminal kingpins whose entire empires are based on Bitcoins, such as the Dread Pirate Roberts, who anonymously operates an online black market called the Silk Road. So sooner or later, the Bitcoin will have to somehow reach the art world. And it will soon thanks to London’s Moniker Art Fair. 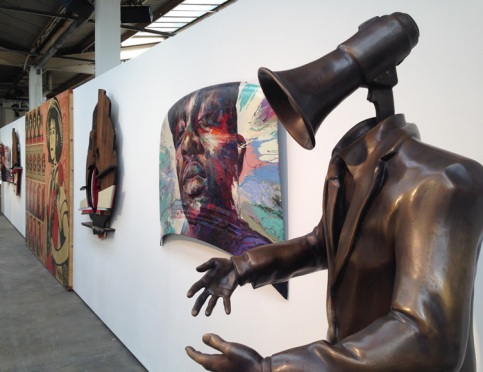 For the past six years, the London Moniker Art Fair has been the leading show for contemporary urban art, and now it’s partnering with Fork The Banks, a group of online payment activists, in order to officially bring the use of the Bitcoin into the art world. Galleries from the United Kingdom, South Africa, the Netherlands, France and Germany will be participating in this combination of art and technology during the Moniker, which will take place in mid-October in East London. Also on display at the Moniker are works by Banksy, as well as Ryan Callanan’s Star Wars-inspired works from TAG Fine Arts.

Also, on a side note: today marks one year since I’ve started writing for the Artoholic. Thanks to everyone who comments and who likes the articles on both WordPress and Facebook. If you haven’t already, please go to the Artoholic homepage and subscribe to receive notifications on new articles.

Nathan Scheer is contributor to The Artoholic and a webmaster for TheArtExperts.org, who is currently studying History and International Studies at Elon University in North Carolina. He has also worked for Rehs Galleries, Inc. and Rehs Contemporary Galleries, Inc., which specialize in 19th and 20th Century European paintings and contemporary academic paintings, respectively, as well as Christie's Rockefeller Center.
View all posts by Nathan Scheer »
« Thank You For Breaking Our Vase
This Game is Rated M for Magritte »