Illma Gore is an Australian-American performance artist known for works that include very strong political messages within them. Her works include Marriage Equality, in which she rode around the city of Brisbane on the public bus without a shirt, with “My shirt didn’t match my rights” painted on her back. However, she has gained some notoriety outside of Australia when she presented her newest work to the Maddox Gallery in London. It’s a painting of the Republican frontrunner Donald Trump (Caution: This work cannot be unseen). 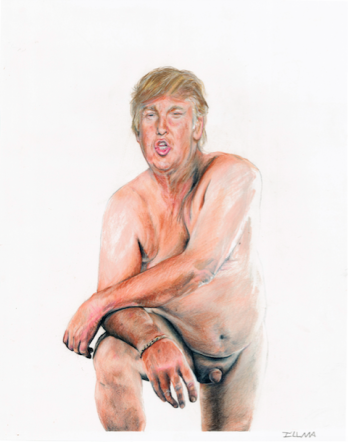 The drawing shows the source of why Donald Trump is the way he is. And Marco Rubio kind of predicted it: “Have you seen his hands? You know what they say about men with small hands?” Yes. We all know that Donald Trump has a little dick. In fact, Gore cited Rubio’s comments as an inspiration for the piece. The Maddox Gallery in London has been the only gallery willing to exhibit the piece after many turned it away because of security concerns. And, in an act that we all completely expected, Gore is being threatened with a lawsuit by Trump’s legal team if the drawing sells. It currently has bids on it of up to £100,000 ($145,000), and Gore has said that the money that she does receive from the painting will in part be donated to the Safe Place for Youth homeless shelter in Los Angeles. Gore originally posted images of the piece on Facebook with the very appropriate subtitle, “No matter what is in your pants, you can still be a big prick.”

You can look at Illma Gore’s other works by clicking here.

Nathan Scheer is contributor to The Artoholic and a webmaster for TheArtExperts.org, who is currently studying History and International Studies at Elon University in North Carolina. He has also worked for Rehs Galleries, Inc. and Rehs Contemporary Galleries, Inc., which specialize in 19th and 20th Century European paintings and contemporary academic paintings, respectively, as well as Christie's Rockefeller Center.
View all posts by Nathan Scheer »
« New New York
The Black Anniversary »

2 thoughts on “Avert Your Eyes”