For those who have been reading my articles, you may have guessed that I’m a huge nerd. I correct people’s grammar; I relate to George more than Marty when I watch Back to the Future; and I talk about sci-fi and fantasy with my fellow nerds. But when it comes to art, there’s only a few places where sci-fi and fantasy geeks can find common ground with art nerds. And one of those places is conceptual art. And who better to be the face of conceptual art than the master himself: Ralph McQuarrie. 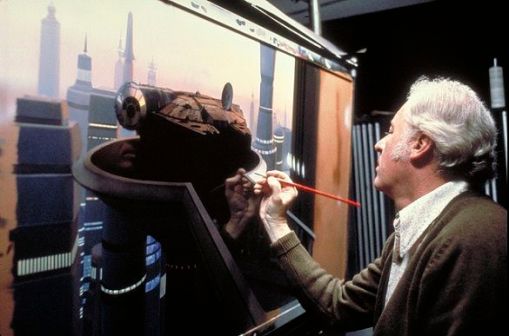 For the non-nerds, Ralph McQuarrie was a conceptual designer and illustrator for many of the greatest science fiction and fantasy films. During the 1960s and 1970s, McQuarrie had worked for Boeing and CBS to create various illustrations. But his career in film began when a young director named George Lucas hired McQuarrie to create some illustrations. Lucas gave McQuarrie a book of notes for some space movie that Lucas called Star Wars and left him to create this seemingly bizarre sci-fi world. McQuarrie’s works were the first places where Darth Vader and C-3PO came to life. He used scenes from the Fritz Lang film Metropolis, and episodes of Flash Gordon in order to create what Lucas had previously just described on paper. It was undoubtedly his drawings that later convinced 20th Century Fox to finally fund Lucas’s dream project. Had George Lucas simply pitched the plot to film executives, he probably would have been denied right then and there. It’s always nice to have a visual.

McQuarrie later worked on the other two Star Wars films, The Empire Strikes Back in 1980 and Return of the Jedi in 1983. Some of the other films that he worked on include Close Encounters of the Third Kind (1977), Battlestar Galactica (1978-79), Raiders of the Lost Ark (1981), E.T. the Extra-Terrestrial (1982), Cocoon (1985), and Star Trek IV (1986). In other words: this one man is responsible for my childhood and the childhoods of so many others. George Lucas and Steven Spielberg may have been the ones who created these extraordinary universes and stories in their heads, but it was Ralph McQuarrie who took what was merely written on paper and created something that we all could see and fully experience. In the words of George Lucas: “His genial contribution, in the form of unequalled production paintings, propelled and inspired all of the cast and crew of the original Star Wars trilogy. When words could not convey my ideas, I could always point to one of Ralph’s fabulous illustrations and say, ‘do it like this’.” He would have been 87-years-old today.

You can look at his annotated Star Wars portfolio by clicking here.

Nathan Scheer is contributor to The Artoholic and a webmaster for TheArtExperts.org, who is currently studying History and International Studies at Elon University in North Carolina. He has also worked for Rehs Galleries, Inc. and Rehs Contemporary Galleries, Inc., which specialize in 19th and 20th Century European paintings and contemporary academic paintings, respectively, as well as Christie's Rockefeller Center.
View all posts by Nathan Scheer »
« Good Queen Bess
19th Century European Art in New York, May 2016  »