Painting the Upside Down

Hey, I’m back. I know I’ve been away for a while, but I’ve been roaming about Southern Europe for a month…

… on top of that, I’ve been trying to manage my schoolwork among other things. To make up for roughly three months of radio silence, I’ve decided to write about something that I know everyone is obsessed with right now:

So, I just made my dad watch Stranger Things, making this the fourth or fifth time that I’ve watched the series from beginning to end. I love Stranger Things, and so do my parents now, with another Eighties-themed easter egg unveiled every time I watch an episode. My mom and dad would have been fourteen and seventeen in 1983, respectively. So I guess it’s almost like they’re reliving their childhoods. The works of Stephen Spielberg, John Carpenter, Stephen King, and countless others were meticulously studied and reimagined by the Duffer Brothers to make Stranger Things what it is. However, amidst all the Eighties cultural icons whose work contributed to the production and design of arguably the greatest television series in the past year, there is an obscure figure whose paintings inspired one of the more interesting parts of the show, which is known to fans as the Upside Down. I’ll try not to include any spoilers if you’ve been under a rock since August and haven’t watched the show yet.

In Stranger Things, the Upside Down is the name given to an alternate dimension that’s a version of our world that’s dark, has a toxic atmosphere, and covered with this grotesque vegetation. In the show, it’s likened to the Vale of Shadows by the nerdy, Dungeons & Dragons-playing kids. There are a lot of places where the designers of Stranger Things drew from to bring the Upside Down to the small screen (being a computer screen at two in the morning). However, the most interesting of all the sources is a relatively obscure Polish artist. His name is Zdzisław Beksiński.

Beksiński’s work falls under the strange category of dystopian surrealism. Dark, deathly landscapes with skeletal figures, features of modern gothic art, and lots of sinister sfumato. One of the main antagonists in Stranger Things is an otherworldly monster known as the Demogorgon to the nerdy kids. Films like Alien, Predator, and Jaws all contributed some of the individual characteristics of this monster. But, the figures found in Beksiński’s work also shows these malformed humanoid creatures with spindly arms and legs, along with toned but eerily pallid skin. The concept artists who worked on Stranger Things cite many things as contributive to the final product, but that Beksiński’s art really provokes this ethereal hell that the Duffer Brothers had in mind for the Upside Down. But Stranger Things isn’t the only place where Beksiński’s influence can be seen. Anyone who knows of the menacing films of Guillermo del Toro will undoubtedly has seen Beksiński being channeled, from Hellboy to Pan’s Labyrinth. 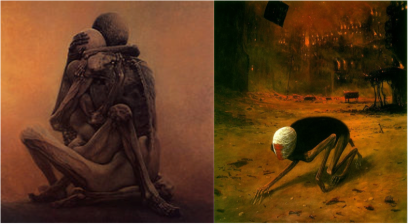 Beksiński also worked in sculpture and photography, but his paintings are his best known work. What’s interesting is that all of his works are untitled. Unfortunately, Beksiński couldn’t be alive to see his work used in the huge success that Stranger Things has become. Within the span of seven years, his wife passed away, his son committed suicide, and, in 2005, Beksiński was murdered in his home in Warsaw. Most of Beksiński’s work remains in museums in Poland, like in Częstochowa and Sanok.

Nathan Scheer is contributor to The Artoholic and a webmaster for TheArtExperts.org, who is currently studying History and International Studies at Elon University in North Carolina. He has also worked for Rehs Galleries, Inc. and Rehs Contemporary Galleries, Inc., which specialize in 19th and 20th Century European paintings and contemporary academic paintings, respectively, as well as Christie's Rockefeller Center.
View all posts by Nathan Scheer »
« January 2017
28 Years Later »