I have to say, one of the greatest aspects of working in the art world is the opportunity I have to meet amazing people. Last week, I was working our booth (Rehs Galleries) at the LA Art show and saw a number of actors, musicians, and other celebrities but if I am being completely honest, that was in no way the highlight of the show.

A few months ago I came across a news article about a talented young artist from LA, Charles Gitnick, who came to New York with his father to sell his art… on a street corner in SOHO. Turns out he sold a number of works and made over $1,500. Might not sound like much but I haven’t yet told you that he’s just 11 years old! Anyway, I re-posted that article to our gallery’s Facebook page and didn’t think much more than, “well, this kid is pretty cool and makes some awesome art.”

Unknown to me, Charles and his father saw my post and made sure they stopped by our booth in LA. To be blunt about it, this little guy is a bad-ass and is making some big moves as he gets ready for his very own show in a New York gallery later this year. Make sure you keep an eye out for this kid, it certainly will not be the last time you hear his name. 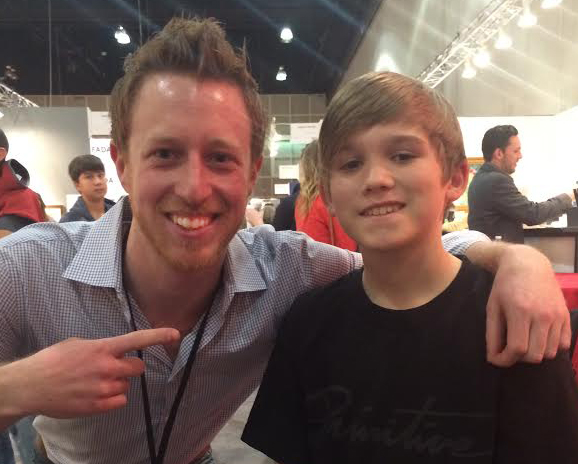 Lance Rehs is the most recent addition to his family owned art galleries, Rehs Galleries and Rehs Contemporary Galleries, which specialize in 19th and 20th Century European paintings and contemporary academic paintings. He earned his degree in Business from Hofstra University in 2010 and began his career working under a financial advisor. His education and previous work experience is rooted in finance, giving him the tools to understand complex markets and to decipher market trends. His knowledge of art and finance provides him with a unique perspective, allowing him to value art as an asset while appreciating it for the beauty in itself.
View all posts by Lance Rehs »
« Italy seeks return of about 700 looted ancient objects from UK
Sun, Sand and a Rake In His Hand »