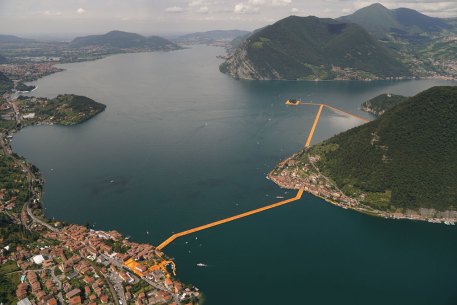 Earlier in the month, the renowned Christo unveiled his latest work that has taken him forty-six years to bring to realization. The Floating Piers have been out on Lake Iseo, in northern Italy since 18 June, and will continue to float out in the lake until 3 July: a bridge dressed in saffron-colored fabric that connects two of the lake’s islands to mainland Lombardy. The Floating Piers marks the first work done by Christo since the death of his wife Jeanne-Claude in 2009. The last piece done by the duo before Jeanne-Claude’s death was The Gates, set up in New York’s Central Park in 2005, something that I had the opportunity to see, even thought I was only eight-years-old at the time and couldn’t fully appreciate them.

The works of Christo and Jeanne-Claude were always envisioned and executed on monumental scales. Among their best known works are the wrapping of the Reichstag in Berlin, the wrapping of the Pont-Neuf in Paris, as well as The Gates in New York. And like these previous works, The Floating Piers was created on a monumental scale, with the bridge requiring three kilometers on fabric to fully cover. It’s the only artwork in the world that I know of that allows you to walk on water. And even though it cost around 15 million euros, The Floating Piers will be open to the public for free, and will attract somewhere around half a million visitors. And it’s because of the price of the piece that caused some people to become a little annoyed.

Visitors can experience The Floating Piers free of charge, which has left the burden of security and sanitation, among other things, to be taken on by the Lombardy government. Because of this, an Italian consumer group called Codacons has filed a complaint that the installation is causing a waste of public funds. Furthermore, the actual fabric being used on the bridge is deteriorating at a much quicker rate than initially predicted, leading Italian authorities to close the installation during the night. Because of the now constricted window of time available to people, overcrowding at Lake Iseo has become a major issue. Italian police have even been forced to leave over three thousand people stranded at a train station in Brescia because they could not permit any more visitors until the area around Lake Iseo cleared out.

“Do you know that I don’t have any artworks that exist? They all go away when they’re finished,” said Christo in 2005. So, like everything that Christo and his late wife Jeanne-Claude have created in the past, The Floating Piers will be taken apart and recycled after 3 July 2016.

Nathan Scheer is contributor to The Artoholic and a webmaster for TheArtExperts.org, who is currently studying History and International Studies at Elon University in North Carolina. He has also worked for Rehs Galleries, Inc. and Rehs Contemporary Galleries, Inc., which specialize in 19th and 20th Century European paintings and contemporary academic paintings, respectively, as well as Christie's Rockefeller Center.
View all posts by Nathan Scheer »
« 19th Century European Art in New York, May 2016
Standing Guard at Minitrue »