In this time of advanced technology and political mayhem, we can all look back on the speculative works of the past like Brave New World and A Clockwork Orange to see if the fictitious worlds of Aldous Huxley and Anthony Burgess are closer to our world than the past. The epitome of this brand of fiction is Nineteen Eighty-Four by the great English writer George Orwell. Nineteen Eighty-Four is one of my favorite books, telling of a future London dominated by four towering ministry buildings: the Ministry of Love, which houses the infamous torture chamber called Room 101; the Ministry of Peace; the Ministry of Plenty; and the Ministry of Truth, or Minitrue, which houses the propaganda department, where employees edit old newspapers to fit the government’s version of the past. 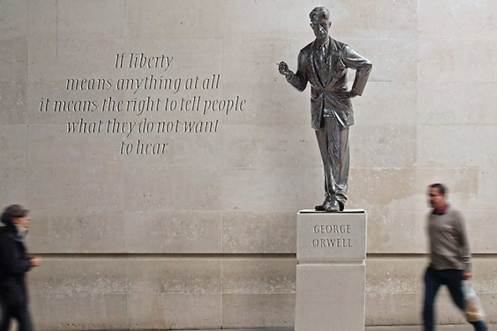 And now, sixty-six years after Orwell’s death, the BBC has decided to erect a life-size statue of Orwell, being that he worked for the BBC for a couple years during the Second World War. The statue was initially rejected several years ago, being that Orwell was considered too controversial a figure to commemorate. However, after consideration by the new Director General Tony Hall, a number of prominent Brits have expressed support for the commemoration and have donated towards the statue’s completion, including Tom Stoppard, Rowan Atkinson, and Melvyn Bragg. Together, the private donations have amounted to £110,000, or $142,000.

The statue itself will be made by Martin Jennings, who is known for his portrait of Edward Heath at the National Portrait Gallery, the bust of Queen Elizabeth the Queen Mother at St. Paul’s Cathedral, and life-size statues of Charles Dickens in Portsmouth and John Betjeman in St. Pancras Railway Station in London. The statue will stand outside of the BBC New Broadcasting House in Westminster, London. Jennings initially was asked to create the statue as the dying wish of the former Member of Parliament from Hampstead Benjamin Whitaker, who was a great admirer of Orwell. Whitaker pushed for the statue to be placed outside the BBC Broadcasting House because it is known that Orwell modeled the inner workings of the Nineteen Eighty-Four ministries like Minitrue on his experiences working in propaganda at the BBC. The statue will be unveiled later next year, accompanied by a wall carving, reading “If liberty means anything at all it means the right to tell people what they do not want to hear.”

Nathan Scheer is contributor to The Artoholic and a webmaster for TheArtExperts.org, who is currently studying History and International Studies at Elon University in North Carolina. He has also worked for Rehs Galleries, Inc. and Rehs Contemporary Galleries, Inc., which specialize in 19th and 20th Century European paintings and contemporary academic paintings, respectively, as well as Christie's Rockefeller Center.
View all posts by Nathan Scheer »
« Christo Sinking or Swimming
Victory at the Hague »